How do you properly celebrate someone’s continued existence in this world when you’re too far away to give them a hug?

Why are long-distance birthdays so hard?

Long-distance relationships are difficult to navigate, regardless of whether they’re romantic, friendly, or familial. It’s relatively easy to upkeep ties with someone when they live next door, but much tricker when merely talking to someone requires reliable wi-fi and a functional screen.

And a birthday is the one day of the year when a person is supposed to feel the most celebrated. A glitchy Skype call just won’t cut the mustard.

Sometimes, it’s even harder for all the people who want to celebrate than it is for the birthday person themselves. I’m thinking of my own mom and dad – I’ve been living far from my birthplace for 12 years now, and I remember several birthdays being particularly tearful for them. Longing to make someone feel special on their big day but not knowing how to do so can hurt.

Finally, feeling lonely on your birthday can give you the sense that you’ve been forgotten. Even though that’s probably not true – you’re a glorious human being who enhances the lives of the teeming masses just by being you – spending a birthday away from those you love can be isolating. You might try to convince yourself that “it’s just an arbitrary date…” but pretty much everyone likes to feel special on their big day. The hardest feeling to cultivate over the distance is connection, and that’s what’s so often missing in long-distance birthdays. So the best advice to think about what kind of special things make the birthday person feel connected.

A generic “happy birthday” comment on Facebook is perhaps better than nothing… or perhaps not. It might inadvertently hurt the person in question, who could think that you’re not willing to make any more effort than this low-calibre, impersonal gesture.

Instead, consider what makes the birthday person unique. Do they love crocheting and craft beers? What if you got them a crochet-your-own-coozie kit? Perhaps they’re into cats and gardening. We’ve seen windowsill garden boxes specifically built with felines in mind (and we kind of want one for the office).

Even better than buying them a gift that fits them to a T is to make something yourself and send it to them in the mail. Opening a package that contains something the sender has made feels precious when you’re far away, even if it’s a weird sketch of the receiver as a wookie. It’s not so much about the gift itself, but rather the time and care it represents – which is hopefully celebratory of how much better the world is with the birthday person in it.

And that aforementioned glitchy Skype call? If you can find decent enough wi-fi, it can mean the world to the recipient. Even better: put a “DO NOT OPEN UNTIL” notice on the package you send them, and have them finally open it while you watch. Talk about an upgraded video call. We truly are living in the future. 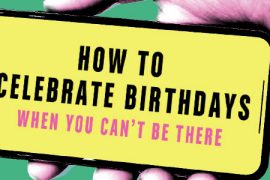 How to celebrate birthdays when you can’t be there