If it’s your birthday, perhaps you’re sharing it with a sibling. Twins: beloved by film-makers to add a hint of weird, and similarly intriguing to just about everybody else.

Turns out, twins are a smidge more common than I thought before researching this article. The incidence of twins is around 3 in every 1000 births for identical and 21 per 1000 for non-identical.

Twins have a genetic, run-in-the-family thing going on. Women with a family history of fraternal twins have a higher chance of producing fraternal twins themselves, as there is a genetically linked tendency to hyper-ovulate. This has only increased since the prevalence of in-vitro fertilization, which boosts the likelihood of a multiple birth, though that’s only for fraternal twins. Eating too many yams, which are apparently high in estrogen, has the same effect. Oddly.

Fraternal, identical, and even conjoined

Fraternal non-identical twins develop from two separate eggs in the uterus; the medical term is dizygotic. The genetic connection is just the same as siblings born at separate times. They may look alike, or they may not.

The degree of separation of twins in utero depends on when – and if – they split into two zygotes. Dizygotic twins always have two zygotes, as it says on the tin. Monozygotic twins split into two zygotes at some time early on in pregnancy. This separation determines chorionicity (number of placentae) and amniocity (number of sacs) for pregnancy. Dichorionic twins either never divided (they’re dizygotic) or they divided within the first 4 days, while monoamnionic twins divide after the first week.

Still with me? Good.

In some rare cases, twins become conjoined; sharing organs, even brains. This gets complicated for everyone involved, usually requiring surgery. There are also chimeric twins, where some of their organs come from their twin or the mother. Finally, there are parasitic twins, when one twin foetus fails to develop completely and acts parasitically towards the other. This can be either benign or require medical treatment.

There are even mirror-image twins. One might be left-handed, the other right. They even have organs on opposite sides of their bodies. Identical twins, although they look similar, can be very different from one another psychologically… or they can share uncannily similar personalities. This can sometimes get a little freaky.

They often share their own language, emotions, sensations, and even ESP-like premonitions of the other’s experiences and symptoms of illness. This sometimes persists even if they’re continents apart. Some share the bruises of the others’ injury and some even share romantic partners… with and without the partner knowing. Kinky. But you’d be tempted, no?

The whole telepathy thing may sound far fetched – but consider, if you will, the case of identical twins Jim Lewis and Jim Springer, separated at birth. When they finally met at age 39, they found they’d both had dogs called Toy as kids, both married twice, both to women called Linda first then Betty second, and both had sons called James Allen. They both worked in law enforcement, smoked the same cigarettes, drove the same car, and drank the same beer. Spooky. Twins in love (’til death do you part)

This strange separated-at-birth connection can backfire. Take the 2008 case of an unnamed British twin brother and sister, raised by different families. They met by chance in later life, fell in love, and got married. When they discovered they were brother and sister, the courts dissolved the marriage.

And the connection may reach beyond the grave. In 2002, a pair of seventy-three-year-old twins were both killed on the Finnish roads. Separately. Within two hours of each other. The first was hit by a truck while cycling… and so was the second. And, no, he hadn’t heard the news of his brother.

And their extraordinary empathy can kill, too. Swedish twin Sabina Eriksson went to meet her sister Ursula in the UK. Shit went sideways. A spree of violence culminating in them running about on the M6, assaulting police. Ursula threw herself to her own death under a truck. Sabina – unperturbed – got hit by a car. Subsequently, and bizarrely, she was released, which ended in her stabbing a bloke to death in Luton and then jumping off a bridge. According to psychologists, Sabina suffered from a form of temporary insanity, and Ursula was “infected” by her twin’s madness. As alibis go, you can’t beat being a twin. In Germany back in 2009, a talented jewel thief made off with €6.8 million worth of jewellery, nicked from a luxury department store. Either Hassan O. or Abbas O. (last names aren’t provided, as per German law) was guilty of the crime, but after DNA scans, both men had to be released, since the prosecution couldn’t prove which one actually committed the crime. One wonders whether they split the loot.

In 1993, Ronald Anderson was arrested for assaulting his estranged wife. The only hitch was that Ronald Anderson was already serving 6 months for the same crime. They checked, and he was still there. Before concluding time-travel to be the only solution, a friend of the wife-beater solved the dilemma: Ronald’s identical twin Donald regularly did time for his brother, including serving in Korea instead of him, because he thought Ronald just couldn’t handle it.

Then there’s American Edith Casas, an identical twin who, at 22, fell in love with a chap called Victor. Her parents weren’t too happy about it, since he was doing a 13-year stretch in prison for murdering her twin sister, Johana. After a psychiatric assessment, she went ahead and married her Prince Charming – while he was still incarcerated. Love. Eh. 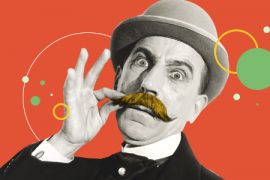