Ever found yourself looking at the cover of a book and wondering what it might be about in a parallel universe where just a few small things are different? Us too!

Our curiosity got the better of us so we did what anyone would do and put a question out through Facebook.

We asked people to remove a single letter from the title of a book and tell us what the reimagined book would be about.

And man oh man did people deliver! We’ve been having a great time reading the suggestions as they came in to fill our fantasy bookshelves.

Some of the suggestions were so good that we couldn’t resist asking our superbly talented designers to create some brilliant book covers for them.

Take a look to see our favourite new books and to read the blurbs their authors cooked up for them.

Clifford The Bi Red Dog by Belle Brown. “A great way to teach children about equality for people who are LGBTQ+.” Goosebums by Robert Nabors. “A series based around homeless geese.” The Tim Machine by Mario Richards. “HG Wells tale of a would-be time traveller whose machine, instead of taking him across the ages, puts him into the duelling mindscapes of his neighbour Tim, who struggles with multiple personality disorder. The surface personality is kind and beautiful, but kind of lazy; the other, deeper personality is a selfish, unfeeling and focused serial killer… and it doesn’t like the uninvited presence of our lost traveller.” Ride and Prejudice by Crystal Sirrine. “Bikers have feelings too.” 0 Shades of Grey by Allan Wilson. “It’s just grey – boring and uninspiring just like the original.” When you are finished admiring these covers, take a look at the Facebook thread to see some of the other fantastic title people have conjured up. And add your own too! 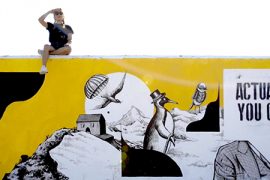 Paint a mural? Actually, you can. 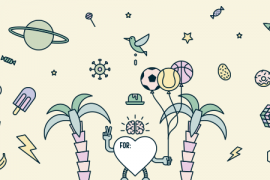